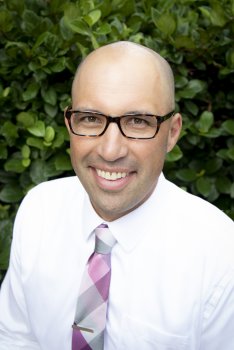 I am originally from Las Vegas, NV. One of the few natives to that city that you will ever know. It was actually a fun place to grow up. In many ways just like any other place, except for that fact that you are always aware of being in Las Vegas: slot machines in grocery stores, billboards along the freeway advertising the latest show or club, old hotel/casinos being imploded to make room for new manifestations, and of course The Strip (many buildings of which are visible from the college campus I attended). I received a BA in European history (2000) and an MA in Soviet Foreign Policy (2004), both from UNLV.

I have taught for HCC since Fall 2006, and solely online for the past seven years. In August 2009 I moved to Colorado and started a Ph.D program in American History at the University of Colorado, Boulder. My goal is to become a university professor. United States diplomatic history is my field of specialization. During 2014 I conducted research trips in Washington, DC, New York City, New England, and Mexico City. My dissertation, entitled Risking “Immeasurable Harm”: The Diplomacy of Immigration Restriction in U.S.-Mexico Relations, 1924 to 1932, considers the ways in which American efforts to place a quota on Mexican immigration during the late 1920s and early 1930s affected official relations between the United States and Mexico. I graduated with my doctorate in December 2015.

In the summer of 2017 I accepted a full-time, tenure-track job as an Assistant Professor of History at Schreiner University, which is a liberal arts college in Kerrville, TX.